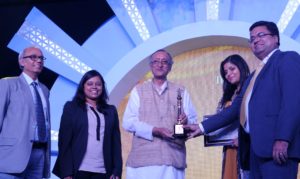 For the second time in a row, Vikram Solar bags the Fastest Growing Company Award, in addition to the Highest Job Creator Award.

New Delhi, 10 February, 2017: Vikram Solar, the globally recognized leading solar energy solutions provider, marked the beginning of the new calendar year with a double award win at the 5th ET Bengal Corporate Awards 2017. The company bagged the prestigious ‘Fastest Growing Company’ award for the second time in a row, along with the ‘Highest Job Creator’ award (INR 300 – 1000 Crore category). Held on 8 February, 2017, the award function this year was hosted at the Taj Bengal, Kolkata.

With proven exponential growth across the globe in the last year across all its core business verticals, Vikram Solar nailed it once again this year by winning the coveted trophy for the Fastest Growing Company. Further, the expansive employment opportunities generated by the company owing to its growing business presence, was awarded with the Highest Job Creator title.

These awards mark back-to-back accomplishments for the organization at the ET Bengal Corporate Awards, having won the ‘Fastest growing company’ award last year as well. The brand has also been awarded for New Entrepreneurial Venture in 2013.

Commenting on the victory, Mr Gyanesh Chaudhary, Managing Director and CEO of Vikram Solar said, “This is the third time that we’ve been honoured at the ET Bengal Corporate Awards and it gives us double the pleasure to have won two of the most coveted awards this year. Further, the award coming from the revered Association of Corporate Advisers & Executives makes it an acknowledgement of our efforts at the most respected circles. We would like to thank the organizers and the jury for this valued and prestigious honour. This will further inspire us to scale new heights and achieve greater success in our forthcoming endeavours.”

Celebrating the 5th edition of ET Bengal Corporate Awards 2017, the Association of Corporate Advisers & Executives, Kolkata and The Economic Times, acknowledged the success of eminent organizations and individuals for their outstanding contribution to the society. The event witnessed attendance from industry leaders and the heads of companies with their head offices/corporate offices in West Bengal, vying for the coveted awards.

About Vikram Solar
Vikram Solar is a leading solar energy solutions provider, specializing in high efficiency PV module manufacturing and comprehensive EPC solutions. With international presence in 5 continents, the company is an active contributor in shaping the solar revolution across continents. Carrying forward the extensive manufacturing experience of the Vikram Group, Vikram Solar, since 2006, is building on a 4-decade-old success story. Vikram Solar’s annual PV Module production capacity stands at 0.5 GW, and the company is further expanding it to 2 GW by FY 2020. The company’s products are designed to the highest standards of quality, reliability and performance. As a fully forward- integrated Solar EPC contractor, Vikram Solar deploys world- class technology to design, install and commission solar projects worldwide.