Many businesses are looking for ways that allow them to take more control over solar energy production. Industrial customers investing in solar energy are looking to keep their future energy bills under their own control, as well contributing to environmental protection. This has made solar energy popular around the world.

Solar panels are widely used by different industries. While the benefits of solar are many, there have been issues of visual distress such as flash blindness and veiling. The risk of an ocular impact is a concern for locations such as airports, where pilots, tower personnel and even military personnel can be disturbed by a glint or glare from the solar arrays. This has started to become a barrier towards the efficient implementation of solar. 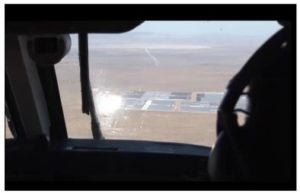 The way out this issue is technology-based – a layer of the anti-reflective (AR) film is coated on the glass of a PV solar panel which improves the panel’s transmittance by reducing the reflectance on the surface of the glass. However, the life of AR coating is limited because of natural corrosion and cleaning of panels.

Another efficient option to reduce reflection is by texturing the surface to make the glass anti-glare. The anti-glare glass roughness is higher than that of the normal glass. When the diffusion effect is increased, some of the reflective light can be transferred into transmitted light, which makes it efficient for power generation, even on cloudy days.

How we are changing the scenario

All PV panels with Vikram Solar can be customized to the anti-glare version as it is the AR film that is the key here. Once the panel is coated, the anti-glare glass greatly decreases the light intensity, and there is no stimulation to the human eye, making it a smart option for projects near airports or similar locations with strict anti-glare requirements.