Government and private players working in a unison has created a favourable environment for solar in India. The growth has been incredible till date, showing considerable increase in energy generation rate (India is estimated to become energy surplus country at the end of 2017). Solar favouring policies, strategies, and systems in place have done a great job in leading India to become the third largest solar market and 4th largest economy in the world.

And although, major cities of India have received attention in energy improvement (through solar installations), rural areas in India are still under the shroud of darkness. Fact shows that Government of India has taken initiatives like- Power for all, Saubhagya plan, and Deendayal Upadhyaya Gram Jyoti Yojana (DDUGJY) to electrify villages. But it is important to note that more than 3000 villages are still un-electrified. Issues concerning reaching the electricity lines to rural areas, and huge distribution losses (~30%) have made it harder to illuminate the rural areas. In such a scenario, it is important to highlight that a 50 kW solar grid with distribution capacity of 5 KM can power ~500 homes, businesses, schools, and couple of telecom towers with ease.

Therefore, it is only logical that the Government should consider using solar powered mini-grids to the needy areas for rapid electrification, awareness, and energy sustainability.

Although, the rural electrification process is progressing (13,97,57,084 households electrified), it is to be noted that just having access to electricity doesn’t necessarily offer energy sustainability. Many of the villages that are already registered as ‘electrified’, have only 10% of their public places and households electrified. And in some instances, electrified villages only received electricity for 5-6 hours a day.  Such a scenario calls for a better energy framework utilization (Solar Mini-grid). And solar installations within villages are gaining popularity, as they promise to offer energy sustainability. Government has taken the hint and taking action on establishing solar mini-grid plants. 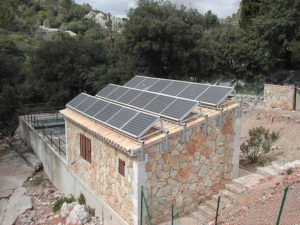 Mini grid installations in Chhattisgarh by CREDA and in Sunderbans (WB) supervised by WBREDA have already shown the capability to light up the un-electrified villages. Establishing a Mini-grid circle has brought electricity to 130 households in villages like Kasina and Bheldi (in Bihar). And following the footprint, Jharkhand Renewable Energy Development Agency (JREDA) has introduced a project to electrify 320 households across 11 villages with the help of Mini and Micro grids. Government of India also has plans to establish 70 grids in Bihar and UP to offer energy. Supporting the initiative, UP Government is planning to offer 30% subsidy on these installations. Research shows that such developments have led to 16% off-grid development target.

However, as the country focuses on 100% electrification within 2019, more effort on establishing mini-grid is needed to achieve the target.

Policy: Material procurement laws, delays in land acquisition, lack of awareness, and the gap between creation and implementation of policies- are slowing down solar Mini-grid’s growth. India desperately needs a regulatory framework to support and aid these processes in the villages. More awareness is needed to help the people in the village understand the cost, the profit and the benefits of choosing SPV mini-grid over diesel power energy solutions. Encouraging private entities to deploy isolated Mini-grids in villages is also needed. Last but not the least, a focus on making subsidy disbursal rules more flexible is needed to encourage private developers.

Economic: Mainstream economy is mainly focused on utility based solar installations. Therefore, lack of financing options have isolated Mini-grid developers and brought the question whether their ventures will turn profit or not. Lack of profitable off-take agreements, and debt financing facilities discourage the developers from venturing into rural solar electrification. Likewise, lack of subsidies on energy storages has made solar growth challenging.

Technological: Delays or lack of net-metering deployment ratio, lack of or no standard responses framework to system abuse, confusions in tariff collection are few of the technological issues that halt Mini-grid progress. 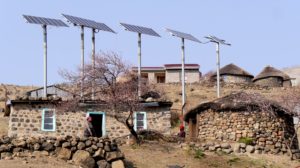 Solar Mini-grids promise to offer energy solutions similar to standard grid based energy, however with solar mini-grid, there will be no electricity outages. Besides, with solar panel cost and tariff declining, it would be a feasible option for people in the villages than shelling out money for diesel or kerosene for energy. Therefore, solar mini-grids are best option to illuminate the rural parts of India, and create awareness within common people to adopt solar.

However, to make mini-grids more effective, some changes need to be made in the existing renewable energy structure. A clear policy development and implementation can certainly help. Nevertheless, the success lies within collaborative work between the Government and private entities.