What is energy returned on energy invested (EROI)? 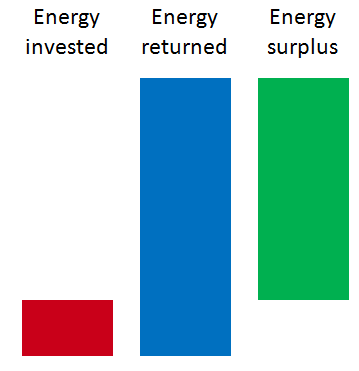 Energy returned on energy invested (known as EROI or sometimes EROEI) is the ratio of the amount of useable energy produced by a given energy source to the amount used by humans to acquire it. For example, if an oil extraction facility requires 1 gigajoule (GJ) of input energy to produce a barrel of oil that yields 5 GJ, then this facility would have an EROI of 5, which equals a net energy surplus of 4 units.

Energy invested only includes energy invested by humans and excludes natural energy inputs such as the nuclear fusion that occurs within the sun. In terms of the energy output, this refers only to useable energy. Thus, any energy output inadvertently as heat or sound does not count toward the energy returned – only that which is utilised by humans.

In the case of a solar panel, it requires input energy to extract the silicon, refine it, and assemble it into solar cells and then modules. Other components such as the inverter, mounting and cabling are also the product of manufacturing processes that require input energy. Subsequently, over the next few decades the solar system generates useable energy for human purposes. The ratio of the input energy to its output energy over its full lifetime is its EROI.

What is minimum EROI? 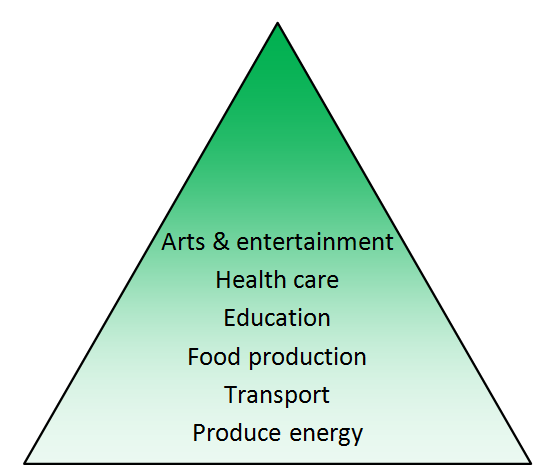 How does this relate to energy payback time (EPBT) for solar panels? Charles A. S. Hall, the systems ecologist who coined the term “EROI” in the 1970s, has also outlined another oft-misunderstood concept: the minimum EROI that a sustainable society must have. The ‘minimum EROI’ for a society is the EROI it would require to maintain its standard of living. An EROI of 1 means there is no energy surplus. It’s hypothesised that an EROI of about 3 allows for simple things like roads, bridges and transport, with increasing levels of EROI enabling food production and then education, health care, and arts and entertainment. There has been much debate as to what the exact minimum EROI would be for developed countries, with some like Weissbach et al estimating it to be around 7 and others such as Ramez Naam believing it to be lower. If an energy source cannot deliver an EROI above this minimum, it can be considered unfeasible to solely support such a society. Later we will look at the EROI of solar photovoltaics and see if it is above this minimum.

As stated, manufacturing a solar panel requires input energy. This can be seen as an ‘energy debt’ that needs to be paid back by the solar module in order to yield a surplus. The energy payback time (EPBT) of a solar panel is the time it takes for the panel to produce enough energy to pay back the energy consumed by its production. The EPBT of solar panels consistently falls as the technology is continuously improved, and it currently stands at about 1 to 2.5 years depending on the type of technology employed and where it is mounted – payback times in sunny regions are generally shorter.

How to measure EROI

This is further complicated by the fact that the EROI of a given energy source changes over time – for solar PV it is rising. Conversely for all fossil fuels EROI is falling, as humans tap oil, gas and coal reserves that are increasingly difficult to extract. Thus, when researchers conduct meta-studies averaging the results of studies over many years, solar PV’s EROI is understated and fossil fuels’ EROIs are inflated.

Why do different studies have such vastly different EROI values?

Further complicating EROI measurement is which inputs to include. Each energy source has its own inherent complexities. In terms of nuclear energy, should the energy involved in decommissioning the plant be included? For tar sands oil from Alberta, should the energy used transporting it to useable regions be included? If the silicon from a solar module is recycled and used to manufacture another module, does the energy used count toward the lifecycle cost of the first module or the second?

Asking questions like these makes clear that EROI is an ambiguous figure, which fluctuates for a given energy source depending on the methods used to calculate energy inputs and outputs. This explains why different sources give wildly different figures for EROI.

So what is the EROI of solar energy?

Studies have given figures for the EROI of solar energy as low as 3.9 and as high as 45.45. The lowest estimate, produced by Weissbach et al, was thoroughly discredited by technology entrepreneur Ramez Naam as glaringly low, and he estimates the EROI of solar PV at “above 10, and probably above 15…And rising.” In the most thorough meta-study of the EROI of solar PV, conducted by Bhandari et al, 232 papers estimating solar’s EROI were analysed and the mean estimate was 11.6. Mean EROI varied greatly between types of solar PV, with cadmium telluride coming in at an astounding 34.2. It is also important to note that many of these studies focussed on older installations, which lowered the average. Most modern studies find an EROI for polysilicon solar PV of about 16 and future systems will continue to rise.

In a similar meta-study, systems ecologist Charles A.S. Hall as well as researchers Jessica Lambert and Stephen Balogh looked at the data in studies of other energy sources. Their results are shown in the following table (except for solar – due to their results underestimating its EROI by including decades old studies, Ramez Naam’s estimate of 15 is used).

Where to from here?

It is clear that solar is becoming an increasingly efficient energy source that will only get better. Its EROI is consistently improving, and the paper by Bhandari et al predicts that “it is likely for PV technology to catch up to the maximum EROI from coal in the future.” Furthermore, it is clear that the EROIs of coal, oil and gas are consistently falling rendering these sources increasingly less useful. Currently tar sands oil is estimated to have an EROI of 4 (according to the meta-study by Hall et al). In the last 40 years, the price of a solar panel per watt has plummeted from $101.05 to $0.61, a 99.4% reduction in price. The technology will only get better and cheaper.

This is more than just a mere vision. As the costs and efficiency of solar improve while the economics of coal, oil and gas become less attractive, it is becoming clear that humanity is moving toward a tipping point, at which solar will experience exponential growth and fossil fuels will be phased out of our energy mix. Vikram Solar embraces this transition to a cleaner and more efficient energy future, with healthier air, and a more harmonious relationship with the planet that supports us. If you do too, get in touch and let’s do business.