Growing under the Sun: Our Decade Long Journey on the Solar highway

Growing under the Sun: Our Decade Long Journey on the Solar highway

The Indian solar industry is quickly turning into a $100 billion investment opportunity. It is quite hard to believe that India made the quantum leap from 825 KW in 2005 to today’s cumulative solar capacity of 8.06 GW. Continuous Government support was the key to this incredible energy transition. This growth story started in 2006, when the Indian Government entertained the idea of energy transition through The Rural Electrification Program.

Vikram Solar’s history with the Indian solar sector stretches back to 2006 as well. Vikram Solar was established in the same year, when the solar sector in India was at its infancy and there weren’t many opportunities around in the country. The Government support, flurry of policies, supportive incentives, and industrial development opportunities that we see today, didn’t exist back then. But, global acceptance of solar energy was growing and weighing the benefits of solar as a renewable energy source, against the prevalent energy condition in India, the decision was made to venture into this futuristic industry.

Since then, the journey has been an incredible one for the company. Vikram Solar has today emerged as one of the top Solar module manufacturing and EPC solutions provider organization in the country, and has marked International presence with entry into 5 continents across the globe. 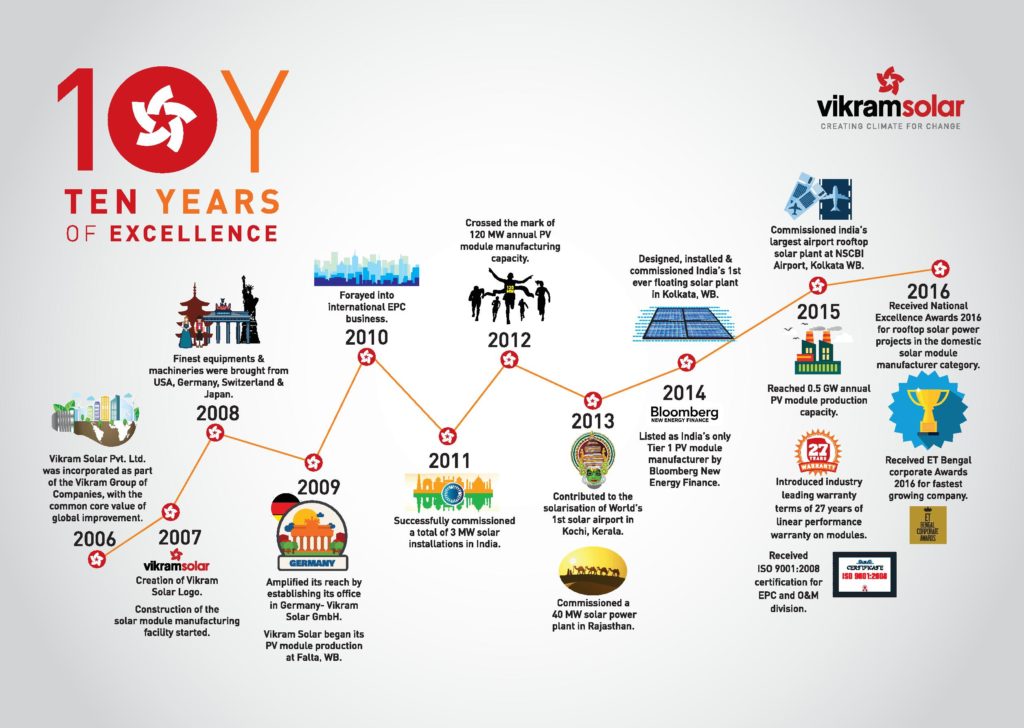 Of course there were challenges. But, the challenges were welcomed in anticipation of the changes yet to come. The backing up of an encouraging Government helped scale up the Indian solar sector, and Vikram Solar grew alongside.

Prime Minister Shri Narendra Modi’s aggressive approach towards nurturing renewable energy, especially solar, has served as a game-changer the industry was looking for. The announcement of JNNSM target revision from 20 GW to 100 GW by 2022 created an urgency, bringing investors and encouraging private players to contribute in the development. And when India’s cumulative grid interactive or grid tied renewable energy capacity reached about 42.85 GW, surpassing hydro-electricity, the sector’s aspirations towards reaching 100 GW by 2022 was renewed. Today, rooftop solar capacity has surpassed the 1 GW mark, showing 113 per cent growth rate in the last 12 months. The country also has 22 GW of cumulative capacity of projects in the pipeline, with over 13 GW under construction. Government has taken another decisive action through establishments of Solar parks. Currently, more than 34 solar parks have been approved in 21 states. These initiatives have been further strengthened by endeavours like growing awareness campaigns, increasing rooftop installations in Government buildings, rural electrification initiatives, providing 30 per cent subsidy to most solar powered items such as solar lamps and solar heating systems, and development of smart cities.

Such aggressive measures will surely translate into growth in the renewable energy sector. And Vikram Solar is proud to have contributed in this great development that is promising to bring socio-economic growth in the country.

The present scenario looks highly promising for the solar vertical, and Vikram solar is ready to capitalise on this and reach newer heights. The current annual manufacturing capacity of Vikram Solar stands at 500 MW, and progress is being made towards adding another 400 MW by the end of this FY 2016-17. The continuous expansion of the company is in line with the primary capacity enhancement plan to possess 2 GW annual manufacturing capacity by 2020.

In terms of innovation, the company is charting out an aggressive and value driven approach towards the future. The prototype of our solar tracker HELITRAC was unveiled this year, and it is expected to be released in the market by Q1 of 2017-18. Following the success of our modules with high efficiency PERC cells, newer products such as Glass Modules Bifacial cells, PERC Mono cells, and N-type cells are expected to be introduced in the next couple of years.
In order to enhance our technological and R&D standards, so as to keep pace with global technology and best practices, Vikram Solar has entered into MoUs with Germany based teamtechnik, Indian Institute of Engineering Science and Technology (IIEST), and Finland based Finnwind in 2016.

2015-16 was also fruitful for Vikram Solar in terms of business as we bagged prestigious large-scale government EPC tenders from PSUs like NTPC, Coal India Ltd., amongst others. Today we have a strong order book and are looking at a revenue of INR 1800 Crores in 16-17

While Vikram Solar has followed a flexible business process always, the core idea behind contribution in solar has never changed. Realising how solar energy shift will help the environment heal, our objective was to become an instrument for environment improvement. And we were happy to see the plan come along perfectly, when our 150 mwp installed EPC capacity successfully reduced 668.758 tons of CO2 emissions in eight years.

The very thought during the inception of Vikram solar, was that centralizing our solar contribution to one country or a selected few will not serve the global energy shift. And after 10 glorious years of cross-country solar development, we are still eager to reach and connect the furthest parts of the world through a sustained solar chain. We hope this global linking will allow solar energy to seep through social, political, and continental barriers and illuminate all alike in pursuit of a better tomorrow for the planet.